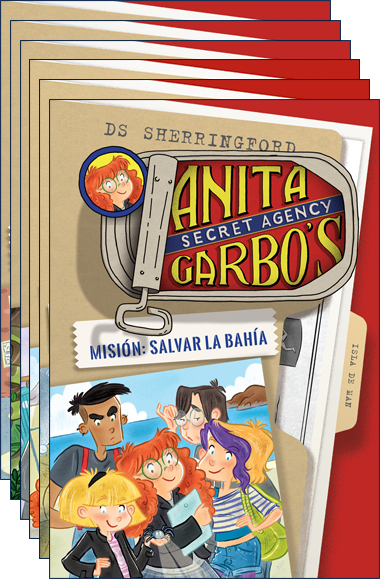 A secret service like no other-strictly off-limits to over 16s!

Mission: Save the Bay!

On the Isle of Man, builder J.J. Furtemberg wants to destroy a beautiful natural bay to develop a port and luxury hotels. When our team find out that the only playground available to local kids will be destroyed, they decide to step in. And they discover that Furtemberg is putting in place a diabolical plan to make money from the project without building anything at all!

In Belgium, the only way for a school of comics to survive is to organize an auction of works by its famous old students. But a few days before the auction, the works of art disappear. Since the school is the only place offering culture in a depressed area, the Alphazeta team help out the students.

The sea around the Strait of Gibraltar is at risk because of mysterious polluting spills that force fish to move away or kill them over a radius of several miles. Police investigation has got nowhere although some people have made statements, so Alphazeta has to intervene.

Mission: Enemy on a Bike!

The Alphazeta team goes on holiday too. In summer we find them relaxing in the French Pyrenees, just before the Tour de France Juniores is due to come through. Despite themselves, they have to deal with a coach who will stop at nothing to make sure his team wins, even fitting engines to the bikes to make them go faster!

Paolino asks the Alphazeta Agency for help because he’s worried about his sister Allegra’s change of character. Before, she was a laughing, optimistic and studious girl, and now she’s absent and irritable, and her grades are a disaster. Maybe it has something to do with her classmates’ attitude to her dress style? After all, they are in Milan, the fashion capital.

This time the Alphazeta agents are off to... Africa! After the theft of some treasures from the Library of Timbuktu, the agents have to go to Guinea to find the thieves. Rainforest, savanna, wild animals... all the best ingredients for a great adventure!

The name Omega Moore comes with a huge question mark. Who hides behind it? Is it a him or a her? How did s/he find out about the adventures of Anita Garbo’s ultra-secret team? It’s a mystery inside a riddle, wrapped up in an enigma. All we know is that s/he posts a sealed beige envelope with each new manuscript, every six months, to her publisher’s editor, like a spy in an old film.