A spy in the French Court.

By night she rides and engages in sword fights. By day she attends lessons in dance and etiquette.

A Spy for the Queen

1633. French Royal Court. There’s a quick-witted girl moving around the halls of the Louvre: it’s Blanche De La Fère, lady-in-waiting to Queen Anne and brave-hearted spy, not to mention able swordswoman at the headquarters of D’Artagnan’s musketeers! Fourteen-year-old Blanche has a rebellious heart and will stop at nothing to protect her queen from court intrigue…

The royal palace is teeming with servants and the courtyard has already been decorated. King Louis XIII’s birthday is approaching, but Blanche has something else on her mind: the malicious red fox is plotting something to frame D’Artagnan and she intends to derail his plan. But she’ll have to descend into the darkened bowels of the bastille, the prison from which hardly anyone leaves alive. 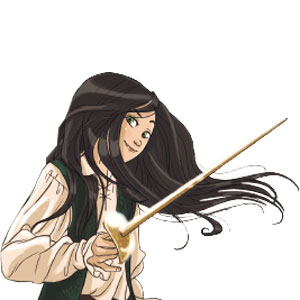 History books cite three Angélique Chevaliers who, between the late 1600s and late 1800s, printed a variety of short publications in Reims, near Paris. It was believed that the name Angélique had been passed down through generations or was, perhaps, a nom de plume. This led to the suspicion that at least one of the three may have been a lady in the French king’s court, an aspiring swordswoman, a lady-in-waiting, Queen Anne of Austria’s personal spy. All excellent reasons, we think, for hiding your identity.