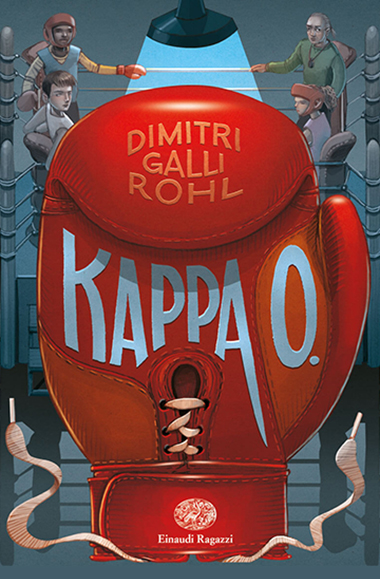 “Bruises. Lost eyes. Blood. Things you normally want to avoid. Things that Mattia, a lucky but perpetually angry teenager, is persistently looking for.
Perhaps because, as his coach says, he was born for boxing. Or perhaps because boxing is the path that Mattia chooses to understand something else; to understand what life has in store for him.”
Boxing is the way Mattia understands what life has in store for him.

Mattia is a boy who has everything, Alì is a young North African, who is working on the construction of the new swimming people that Mattia’s parents want to give him for his birthday. The two seem to have nothing in common until they face each other in the ring. The clash leaves them both tired, bruised and friends. A clash thanks to which Mattia will discover that these two worlds, the one he comes from and the one he frequents, aren’t so far away and so different.

Dimitri Galli Rohl lives and works in Lucca, in Tuscany. With a degree from the A. N. A. D. (Accademia Nazionale d'Arte drammatica “Silvio D'Amico”), he is an actor, director and theatrical pedagogue active throughout Italy. Since 2016, he has collaborated with Book on a Tree, publishing two children's books; the first, “Il romanzo di Holly e Benji” was published by Mondadori in 2017, while “Kappa O.” for Einaudi (“Carta Bianca” series) arrived in bookshops in the spring of 2019. In the same year, the publishing house Marcos y Marcos published “Il Silenzio dei Gondolieri” by William Goldman, the first translation from American English, while during the “Lucca Comics and Games” event, the special edition of “La Principessa Sposa” - also written by Goldman, and personally curated by Dimitri - also came out with Marcos.