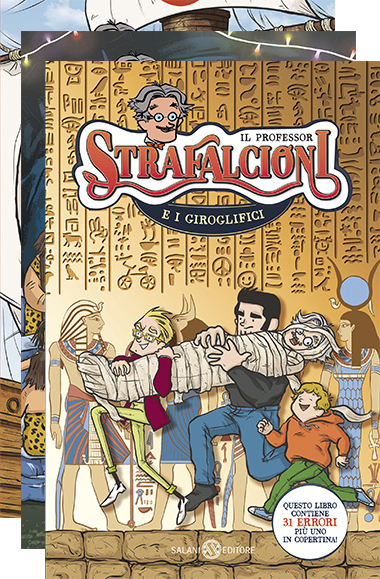 Keep your eyes peeled for the mistakes!

Professor Blooper tells heaps of really funny stories, but there’s one thing he just can’t control: his head is in the clouds, he mixes up the details, and he can’t tell a story without filling it with bloopers!

Professor Blooper and the Gyroglyphics

The professor tells the story of a reckless scribe in Ancient Egypt, who, like a modern writer, fills all of Alexandria with witty hieroglyphs. Disoriented by his hoaxes, his fellow citizens no longer understand anything. The scribe risks ending up in prison, but by chance he finds Cleopatra’s cat, obtaining the queen’s forgiveness.

Professor Blooper and the Wave Men

Professor Blooper tells the story of the last dinosaur, that, after the ice age, thaws and is found by a tribe of cavemen. In the name of science, the cavemen decide that dinosaurs are a protected species; to better supervise it, they attach a rattle to it in order to always know where it is, especially since the dinosaur has a tendency of getting lost.

Professor Blooper and the Discoverment of America

Professor Blooper tells the story of Christopher Columbus and his discovery of America… but it's full of mistakes!