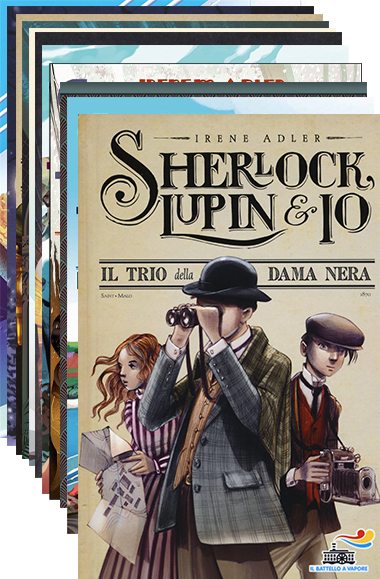 What would have happened if Sherlock Holmes and Arsène Lupin had been friends when they were kids? That is, before they became the smartest detective and most cunning thief of all time?

While on summer vacation, little Irene Adler meets a young William Sherlock Holmes. The two share stories of pirates and have battles of wit while running wild on the sunny streets and rooftops. When Sherlock’s friend Lupin joins in on the fun, they all become fast friends. But the good times end abruptly when a dead body floats ashore on the nearby beach. The young detective trio will have to put all three of their heads together to solve this mystery and many more.

Titles in the series

The Dark Lady
The Soprano's Last Song
The Mystery of the Scarlet Rose
The Cathedral of Fear
The Castle of Ice
The Shadows of the Seine
The Enigma of the Royal Cobra
The Sphinx of Hyde Park
Fox Hunting with Crime
The Lord of Crime
The Port of Deception
The Goodbye Ship
Double Ending
In search of Anastasia
The Enigma of the Man with the Top Hat
The Assassin's Mask
A Crime at Christmas
Deadly Trap for Mr. Holmes
First Class Murder
Intrigue in Constantinople
Great Deception at the Royal Hotel
One last dance, Mr Holmes
Sherlock Holmes's Greatest Cases
The Mysteries of London in the stories of Arthur Conan Doyle
Five Mysteries for Christmas