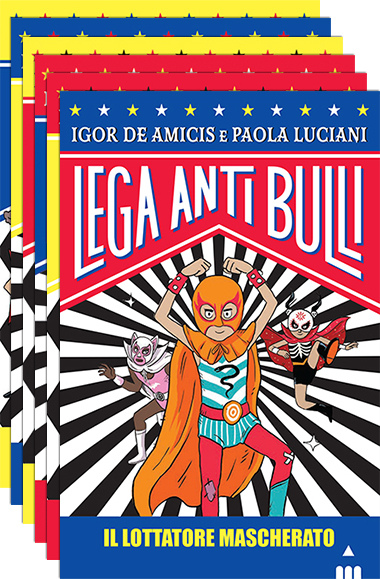 The most intrepid secret society set to fight (and beat!) the planet's bullies.

Do they scribble on your books with indelible ink? Steal your sandwiches at lunch time?

Never fear: racing to the rescue with cunning, courage and a few resounding slaps, it’s the A.B.L: THE ANTI-BULLYING LEAGUE.

Bullies around the world, beware: better be on your way... right now!

Arnold is the new kid at his middle school and things couldn’t be worse: he was targeted by the worst of the bullies, the notorious Joe Socks. Between one ambush and another, he’s invited to a meeting in an abandoned gym. Could it be a joke? No: it’s the base of the Anti-Bullying League, a secret society that aims to defeat the planet’s bullies. One thing is clear: Joe Socks’s days are numbered!

Dorothy McNife is the most fashionable girl in school, but she’s also all the other girls’ nightmare, taking every opportunity to make fun of them on her blog! Panic has now spread and the Anti-Bullying League must intervene. Arnold and his friends, however, have a problem. How can they defeat her? Alison is their only chance. Among spectacular twists and turns, the meeting of the century is being prepared!

A new student has arrived at De La Vega middle school: Thanos, a great Luca Libre wrestler and… a super bully! The Anti-Bullying League jumps into action. Alison gathers information, Arnold and Jamal challenge him to a fight, Nguien builds an extra-powerful android… but it’s all in vain: Thanos seems invincible! Will our heroes manage to discover his weakness?

Strange thefts are taking place in the De La Vega school: bicycle wheels, bathroom pipes, streetlights… It seems a simple case for the Anti-Bullying League, but what if it’s actually something more than a few petty thefts? What if it’s all part of a diabolical plan designed by their arch enemy? Arnold, Alison, Jamal and Nguien prepare to face their biggest challenge: the fate of the League is in danger!

Arnold still can’t believe it: he, who hates insects, bonfires and untamed nature, is forced to sign up to a particularly adventurous camping trip. At least his friends Alison, Jamal and Nguien will be there. But the unexpected is just around the corner: among the campers, a small group of bullies seems intent on ruining everyone’s holiday… For the Anti-Bullying League, a new mission is about to begin!

The whole school is in turmoil: the great Valentine’s Day dance is approaching. Too bad the preparations are going slowly, because someone’s trying to sabotage the party! And as if that weren’t enough, a new girl has fallen in love with Arnold… Between dirty looks from a very jealous Alison, our heroes will have to intervene as soon as possible to save the situation before it’s too late!