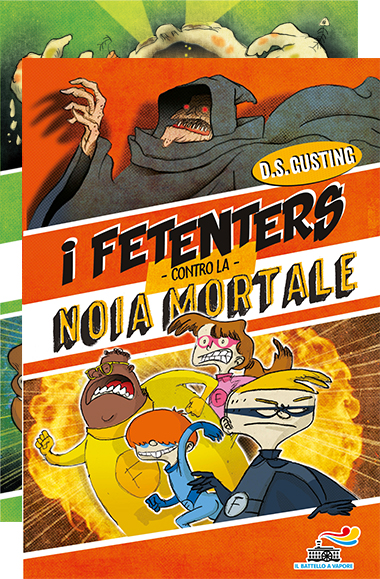 May the farts be with you!

At Charles Darwin primary school, Operation Greyness is underway. Lord Soporiferous and the new headteacher, Darth Water, are on a mission to conquer schools across the planet. Luckily, the Fetid Four are here – brave fighters of Terminal Boredom!

A primary school, a caretaker, 4 superheroes and a great enemy to beat: terminal boredom! The first horrid adventure of the Fetid Four.

The Fetid Four Fight the Creature of the Canteen

The new healthy cook has an evil plan to conquer the school: putrid soup! But 4 unlikely superheroes can stop her… The second horrid adventure of the Fetid Four.

D.S Gusting spent his youth working in a sandwich shop. He became a cheese expert and spent his days looking for Le Grand Putride. After finally tasting it, he was unconscious for several days. On awakening, having forgotten his past, he started a new life as a writer. Clearly this isn’t true. The name hides three mysterious Italian authors…