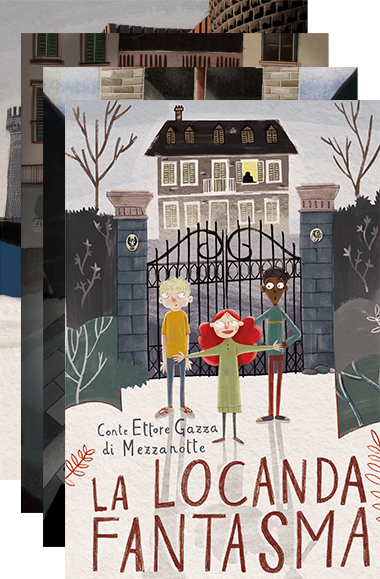 Everywhere you go, there's a mystery to solve.

Three brave and curious children, a mysterious Inn with secret passages and devices, and an incredible treasure up for grabs. The journey of a lifetime awaits them.

In every city Italian city, in every age, usually in a hidden and mysterious street, there's a midnight villa. The travellers like the others, but they move through time and space to complete their incredible Grand Tour. Over the centuries, the secret of the Midnight Villas has been forgotten. Until today...

An incredible adventure awaits Margherita, Rama and Goffredo: through the passage in the Midnight Villa, the three young travellers and their curious cat end up in no less than nineteenth-century Verona, where they'll have to solve a mystery that has lasted for centuries...

An incredible new adventure awaits the three young Midnight travellers! While Goffredo flees to Milan, Rama and Margherita are catapulted to Sardinia, among bloodthirsty Spaniards, clever shoemakers and curious intellectuals…

The challenges for the young Midnight Travelers continue! In Milan, a new riddle awaits Margherita and Rama, who pass from 1542 to 1848. Meanwhile, Goffredo discovers that Count Mezzanotte is imprisoned in the Acqui Terme Villa... in the present! Will they be able to reunite and save him?

Count Midnight is said to have a sly smile and a stuffy manner, as befitting a true member of the gentry. The few who have met him praise his keen wit, firmness of purpose and love of travel. There are also rumours, however, that he is prone to long periods of brooding in his library, during which he disappears for days at a time. All accounts agree on one thing about the recluse: he is a strange, strange man. An impenetrable air of mystery and legend surrounds him – a great man with even greater secrets. Nevertheless, Count Midnight is always keen to meet young travellers, who are new and full of promise.