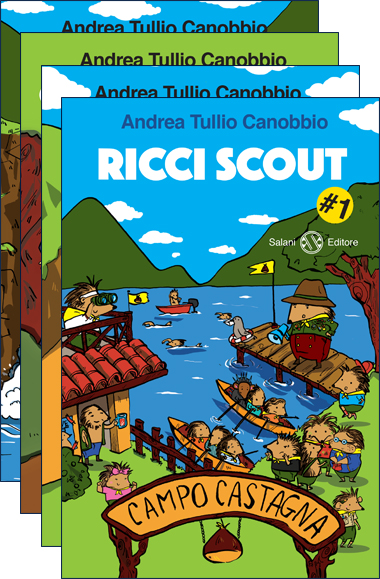 A group of young hedgehogs, a scout camp in The Wilds, a highly sought-after trophy. Welcome to Chestnut Camp, the place to be if you’re looking for adventure.

In a burrow in the subsoil, between log road and dry leaf road, lives the young Messy Hedgehog, a lively but a little clumsy guy, who continually causes trouble. His parents, exasperated, are at their wit’s end, when a postal pigeon delivers a summons from Chestnut Camp. It’s an opportunity to become a Hedgehog Scout!

Summer has arrived and the heat is frightening. Soggy Hedgehog, disappointed and hot, is full of diseases, include HY-PER-HI-DRO-SIS, which makes him drip from all sides. The situation worsens, if possible, when some young hedgehogs accidentally destroy the Great Hedgehog’s secret icebox. But he has a punishment in mind: the hedgehogs must build a dam on the Terror Torrent so he can have a cool bath.

In A Sea of Trouble

The hedgehogs of Camp Castagna wait for the Great Hedgehog to assign them a new mission. But the indolent leader only aims to keep his team well away from the Golden Spike, because whoever wins it must then take on the organisation of the Hedgehoggery, which he has no intention of doing. So, to distract his hedgehogs, he organizes a trip to the sea.

Summer is already running out and still no hedgehog from Chestnut Camp has managed to earn the coveted Golden Spike. The Hedgehog Scouts, however, have drawn up several plans, which so far have all failed. Now desperation has made them bold and they’ve decided it’s all or nothing: they want to cross the barrier...

Andrea is a linguist studying the 20th century Italian literary avant-garde. He graduated in modern letters from Genova University, completed a PhD at Ferrara University and has published articles in academic journals. From 2005 to 2007, he edited the "Maltese Narrazioni" literary magazine in which he also published several short stories. After this, he taught Italian language, literature and civilisation at Monastir University in Tunisia. More recently, he has started writing children’s books.