The Most Wonderful Story Ever Written 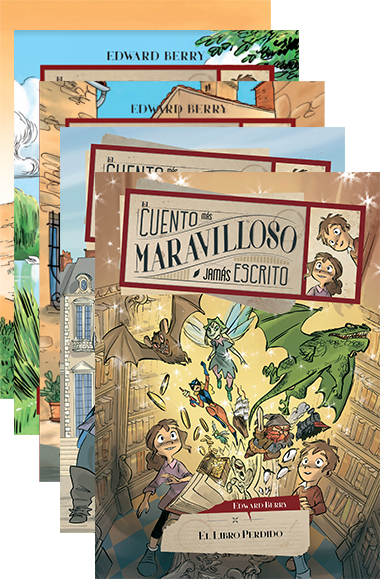 Dive into the pages of your favourite novels.

The contents have mysteriously vanished from a new children’s book, while bizarre new characters and objects have appeared in old classics, ruining these beloved stories.

An incredible event upsets the world of the books: on the day of the launch of what the critic Leo Gutemberg called “the most wonderful story ever written,” the ink disappears from the pages of the book. Text and illustrations literally disappear from all the copies. Alba and Diego, two siblings who love reading, investigate the terrible mystery.

The Four and a Half Musketeers

In the most famous adventures of all time, strange things keep happening. This time it’s The Three Musketeers, where a mysterious dwarf with a very bad character materialises. Alba and Diego go to Paris to investigate. They’ll have to get inside the book to expel the intruder and return the story to its original state. And, meanwhile, the most wonderful story ever written is still missing...

Don Quixote and the Dragon

The Immortal Tales continue to be the victims of strange rewrites. And this time... Don Quixote has to face a dragon. A meat and scale dragon! Alba and Diego have managed to fix two stories, but their adventures have only just begun. And they’re becoming more and more dangerous! Knights, princesses, dragons and... demons?

A terrible mummy kidnaps the White Rabbit just before Alice can follow him and end up in Wonderland! Now the poor girl is dying of boredom! Alba and Diego can't allow it! They have to enter the story, rescue the rabbit and go to the magical place where biscuits make you shrink and grow! There’s not a minute to lose!

Pinocchio wanted to be real child. But he didn’t get his wish. Instead he’s become a real bandit. And it’s terrifying! The story’s protagonist is no longer an adorable child but a villain to fear. Alba and Diego have to fix the story and stop Zargo and his malevolent plan once and for all!

Edward Berry is the pen name for Pierdomenico Baccalario and Eduardo Jáuregui. Eduardo is one of the world’s leading experts on the topics of laughter, play and sense of humour. He is the author of numerous fiction and nonfiction books published in more than 20 countries. Pierdomenico’s books have sold millions of copies worldwide and have been translated into over 30 languages.