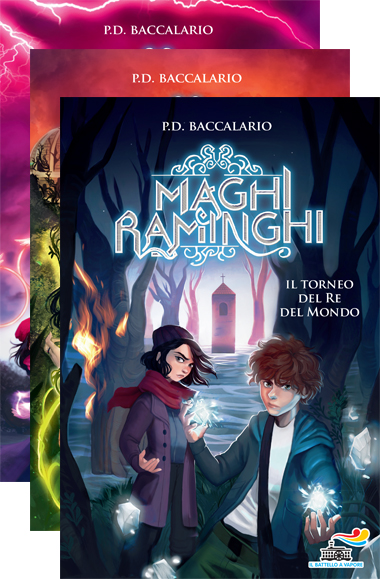 Magic exists. It's highly secret yet it's right before our eyes. We just have to be brave enough to see it.

Magic exists, hidden away in the world we know, and the people who practice it live amongst us, people you would least expect.
Every four years, the eighteen schools of witchcraft and wizardry compete against each other in a tournament to select the King of the World. But outside of that are the Wizards Errant, the unschooled, the street witches and wizards, those with no teachers, only intuition and talent. They are greatly feared by the other witches and wizards because of an ancient prophecy… This is their story.

The Tournament for the King of the World

Every four years, the eighteen schools of magic compete in a tournament to choose the King of the World. An ancient prophecy says that if a Wizard Errant becomes King, a catastrophe will fall on the world of magic… So, the Errant are hunted down and killed in every corner of the world. In escaping, young Calaba meets Floyd, an apparently normal boy who has an innate ability to learn spells… They team up and decide to win the tournament at any cost.

Calaba, Floyd, Spenser and their instructor Jack Cade travel six thousand kilometres from Bardonecchia to Varanasi, where the tournament’s next challenge will take place. As the Errant team face their opponents in the jungle on the banks of the Ganges, disturbing news arrives from the world of magic. It looks like the warning of a wise sorceress is true: Watch out for your friends, Jack Cade, because this is a tournament like no other…

The Errant team must reach Mongolia to face the Air wizards, who attempt to kill their challengers even before they reach their destination. But the storm they raise incredibly reverses course and is about to overwhelm them; it’s up to Floyd, Calaba, Jack Cade and Spenser to prevent it, saving their opponents’ lives. The challenge arrives: whoever wins will have to take on powerful Fire wizard Slender Saunders in the final.