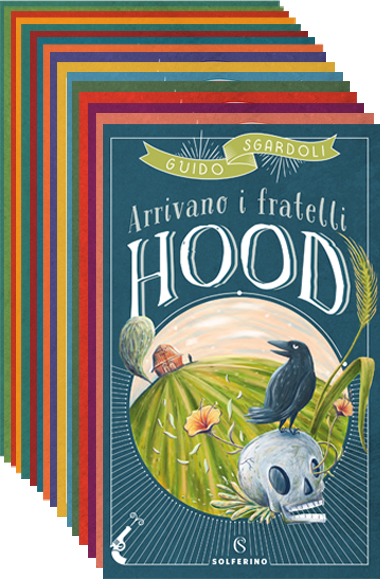 A series for adventure-seekers! Small in size, big on adventure!

Incredible, epic stories, spanning all of history, and ranging around the world, bringing excitement, suspense and mystery, with a healthy dose of laughter!

Missouri, 1863. Frank and Jesse Hood are two brothers who resent the abuses against farmers during the American Civil War. So, they organise a company of young bandits that will give the northern army a hard time. Until the end of the war puts everything back in its place…

China, 1275. Qing is thirteen and wants to become an alchemist like her father, Shu, a gunpowder expert. When her father is kidnapped, nothing remains but to join a convoy of travellers from far away. Among them there’s also a seventeen-year-old named Marco Polo…

THE TERRIBLE TESTAMENT OF JEREMY HOPPERTON

There’s always a good reason to stow away on a sailing ship bound for the atolls of the Pacific Ocean. Especially if you’re a girl from a good family. Especially if you want to escape from conventions. And find out who murdered your sister.

THE RETURN OF THE TSAR

Who is that young man you have to accompany without asking questions? He says he’s a prince, but he walks with the weight of a peasant. He smells the horizon as if it was forbidden. And he dreams of a great train capable of uniting what has been and what will be. Ask him when you are alone.

They came at night, like cowards do, attacking and killing your family. Meanwhile, you slowly repeated the spells of the runes. Because you knew, you knew, they didn’t. That only those who can read the letters of the world will find out sooner or later.

Not all things add up. Deceive me and I will not lie to you; chain me and I will set you free. Cover me with rags and I’ll be one of the seas. Forget me and you will hear my story, in every port of the world.

THE ROUTE OF THE ANDES

It doesn’t matter how high those mountains are, nor how old this plane is. There is only one thing that matters in the heart of a mail plane pilot: each letter must reach those who are waiting for it in time. And if there’s also a package that’s too heavy, named Ricardo, it will arrive with the mail plane. Whatever it takes.

HIRO OF THE MONKEYS

Hiro is on the other side of the world, in the jungle, chased, he who has Japan in his blood and has studied the life of monkeys. And he understands what is hidden in the heart of every mobile phone: a cry for help. Only that, from there, no one can hear him.

“You run, you fight, you even learn to shoot, while the tanks destroy your city. But then, when you stop to breathe, and you look at the guys of your own battalion, a crazy idea takes shape: what if we seize it, that tank shooting at us? What if we used it against them?”

JOURNEY TO THE FORBIDDEN CITY

There is an unexplored kingdom beyond the mountains. Going to conquer it is not a game. It’s growing up and travelling. And you have a treasure, among many, made of small leaves: tea. So yes, Dad, I’ll go with you.

THE WITCH OF LOCH LIATH

Inside the wood are hidden gods and remedies, every danger and every wonder. If you want to enter, ask yourself who you are, and what others will think. Prepare to be judged and condemned. Yet only you, witch, will be able to find the solution. And heal them.

How great this city is, only I know. It is at war, hungry, exhausted. And it has never been so alive. If you are looking for gods, emperors, cowards and heroes, you will find them in Rome. I know it like nobody. And I run much faster than you.

If a storm decides to save you, Tom, it is because off the coast of Japan your language and skills are completely insignificant. And then because in your red hair it recognised the fate of those who will unleash storms bigger than it.

THE MYSTERY OF THE ULDA

The ice is alive, vibrant. Mysterious. It protects distant shadows, which roam the woods. There are those who say they have talked to them and have received magical gifts. But the Ulda are just legends for children. Aren’t they?

There is the salt on your skin that runs and hides. The woods are your home. You don’t need maps or other people’s dreams to know in which direction the sea shimmers. And that a lot of breath and a wooden stick are enough to be the queen of the world.

That man came from Singapore. He doesn’t know that by immersing yourself in certain books you go so deep that you never return to the surface. It’s a secret between you and your father. A solid, robust secret, like a diver’s suit. Like what you are about to do, to go and find it.

STRAYS OF THE KLONDIKE

It’s cold up here, Osso. The sort of cold that makes your toes freeze in your shoes. If we had shoes, that is. We’re starving again, always hunting. Rabbits, wild animals. And those even more dangerous animals, the humans who sift through the frozen rivers for gold.

It all happened overnight. They celebrated, opened fire, burned down the city. And Dad didn’t come back. So, Halima, what can you do, as a girl? Sit at home waiting for this Arab revolution, as they call it, to pass, and for everything to go back to how it was, including your dad. Or… Halima? Halima! Where have you gone?

You don’t just need four days, 150 bucks and the Nirvana concert tickets you’ve been hiding in your room all this time. You need more: the courage to run away from home and follow the road, alone or with whoever’s out there. Until the end. Until the 13th of December 1993.

There’s a white world where you can walk on water. Where the only sound you hear is the ground breaking up. Where fire doesn’t warm and the air bites at your face. At night, the frozen pack sings to the moon. Even if that thing in the sky doesn’t look like the moon. This is the polar winter.